This might be the very special for those who is searching for Psoriasis Treatment through the Ayurvedic way. Skin is the largest organ in the human body. Being the outer cover of our body, skin acts as the first line of defense in protecting our body by preventing the entry of numerous pathogens. But our own internal disease defensive mechanism may sometime affect our shield and lead to a condition called psoriasis.

Psoriasis has become one of the most common skin disease affecting 2% of the world’s population. Since the actual cause of this disease has not been found yet, various factors like genetics, lifestyle, environment, drug reactions etc are commonly suspected. Topical medicines and light therapies are usually used for psoriasis treatment. But success rate is still low.

In recent times, Ayurveda approach to psoriasis is also emerging with good results.  Here in this article we will go through in details about psoriasis and its management through the Ayurveda way or psoriasis treatment through ayurveda.

Psoriasis is derived from the Greek term “psora” which means ‘itch’. It is an auto-immune disease meaning it is induced when our immune system errs to recognize its own cell. It is characterized by raised, reddish, well-demarcated patches covered by silvery micaceous scales. They are seen on face, hands and feet predominantly on elbows, knees and scalp.

What happens in Psoriasis and why?

Normally the skin cells divide in deep layers of skin and slowly they rise to the surface and eventually fall off. A cycle of this phenomenon takes normally a month duration. But in psoriasis condition the skin cells grow rapidly and this cycle is completed within a period of days. That is why skin surface are raised and scales are observed. So, Psoriasis treatment should have done as soon as we know some symptoms of it. 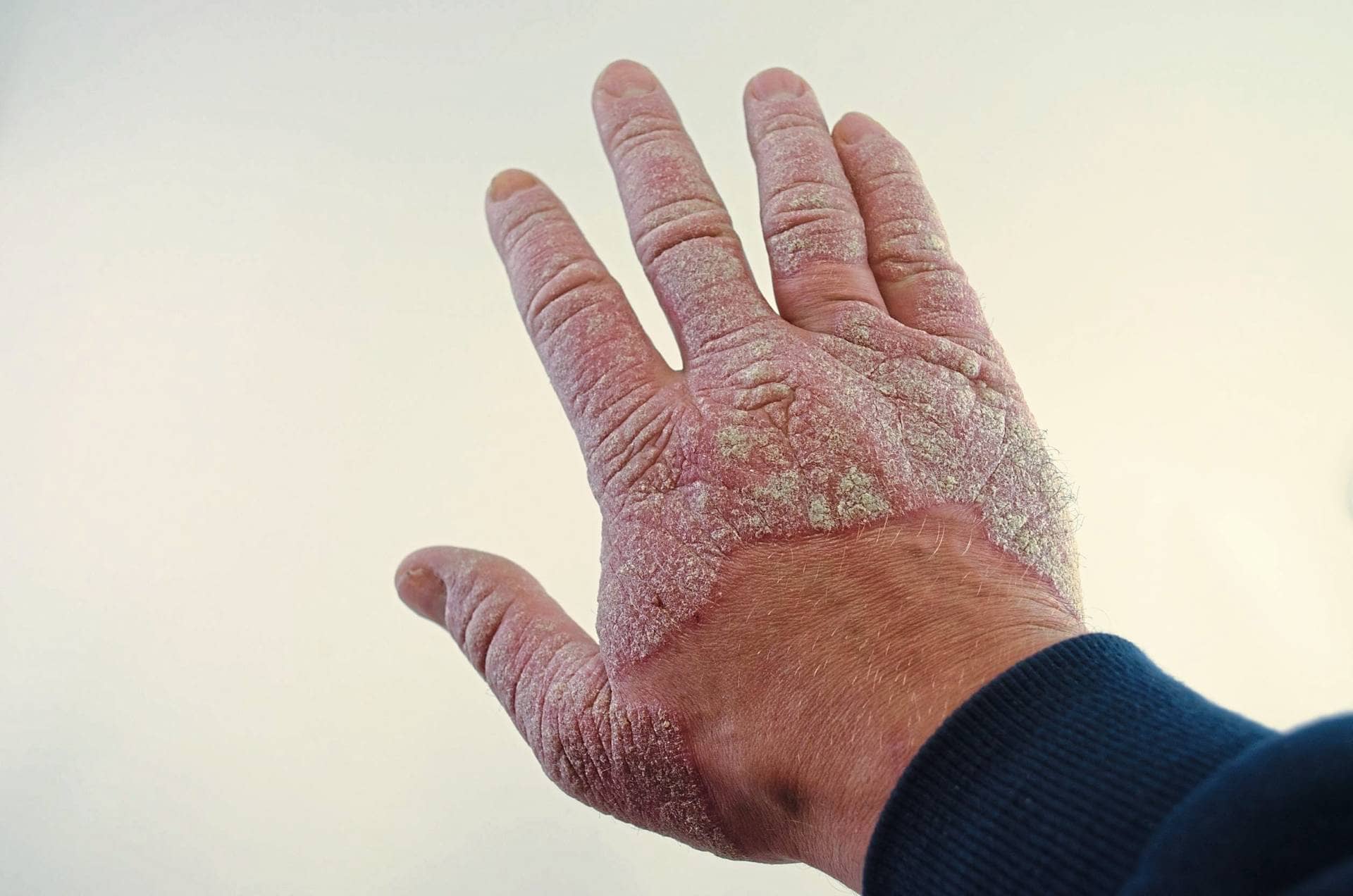 Till this date, primary etiological factor causing psoriasis has not been discovered. But there is a clear genetic component involved. Various studies have shown about 30–50% of patients with psoriasis report a positive family history.

Psoriatic lesions contain activated immune cells in large amount which are assumed to produce many inflammatory mediators which further induce increased growth rate of skin cells. This is the reason for raised and scaly appearance of psoriatic lesions.

These signs and symptoms sometimes disappear completely to recur again in future. Furthermore, there are some risk factors which exacerbate psoriasis. They include:

Ayurveda perspective on Psoriasis or Psoriasis treatment through Ayurveda

Skin diseases are broadly termed as “Kushtha” in Ayurveda. There are 18 kind of major skin diseases described in Ayurveda classics and sign and symptoms of psoriasis seem to have dispersed amongst these classical diseases. So basic principles of skin disease management are usually applied.

In Ayurveda causes of skin diseases are generally attributed to unhealthy diet and lifestyle, unhygienic habits and overexposure to sun.

Applying general principles of Ayurveda, management of Psoriais is done by following methods:

Ayurveda recommends Shodhana karma (detoxification therapies) as the primary step in the management of skin diseases. Ayurveda assumes presence of ama (toxins) present in various channels play a nidus role in initiating diseases like psoriasis. In order to remove such toxins detoxification therapies are applied.

Vamana, the therapeutic emesis, is given under the guidance of experienced Ayurveda physician. Usually the patient is prepared for the therapy restricting the patient to have specific diets for about 2 days. On the main day of the therapy the patient is provided with herbal emetic formulation, which induces emesis. This therapy helps in balancing the aggravated Kapha and expelling the toxins out of the body.

Virechana, the therapeutic purgation, is also given by a trained Ayurveda physician. Similar to Vamana therapy, patient has to follow specific kind of diet before going through the therapy. After appropriate number of days, the patient is given herbal purgative formulation, which causes repetitive purgation. This therapy helps in bringing the Pitta back to its normal state and excreting the toxins present in the lower GI tract which helps psoriasis treatment quickly.

Pulp of aloe vera is very effective in relieving itching and scaling problems.

Ayurveda considers fault in the blood leads to skin diseases. Some of the drugs highly recommended for the purpose of blood purification include:

Here are some dite management for the psoriasis treatment with Ayurvedic harbs:

Since psoriasis is a chronic kind of disease and difficult to treat with conventional medicines, Ayurveda can be the best alternative. With its holistic approach and classical intervention methods, Ayurveda can surely reduce the symptoms to greater degree. If here in Nepal, please consult with authorized Ayurveda clinic and certified Ayurveda physicians.