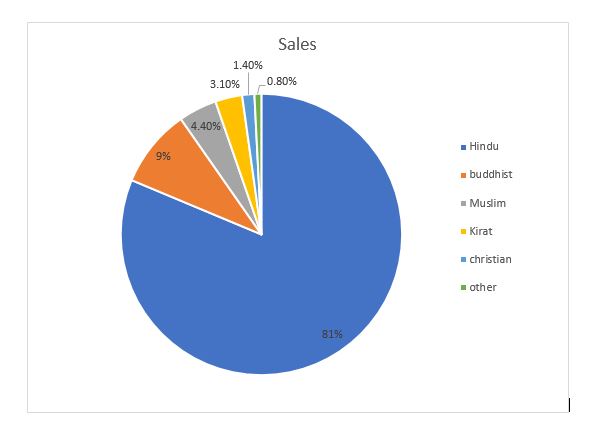 Nepal is a multi-religious country. Religion in Nepal is not just a set of beliefs and accompanying rituals handed down from generation to generation; rather it is a complex intermingling of traditions, festivals, faiths, and doctrines that have permeated every stratum of Nepalese Society in such a way as to become the very heartbeat of the nation.

Nepal is a beautifully blended mixture of diverse religions that coexisted for hundreds and thousands of years ago. According to the 2011 census, 81.3% of the Nepalese population is Hindu, 9.0% are Buddhist, 4.4% are Muslim, 3.0% are Kiratist (indigenous ethnic religion), 1.4% are Christian, 0.1% are Sikhs, 0.1% are Jains and 0.7% follow other religions or no religions. Nepal occupies a special place for Hinduism and Buddhism but it doesn’t mean that other religions here are not given importance. Nepal is now a secular state and supports freedom of religion.

Nepal has always been an intricate and beautiful tapestry formed by the interweaving of many religions. Religious harmony and tolerance was always Nepal’s uniqueness. Some of the religions of Nepal are listed here:

Among many, Hinduism is the most dominant Religion in Nepal. It is believed that the first people to step foot in ancient Nepal were Aryans who believes are recorded in Vedas (collection of over one thousand religious hymns that were to form the foundation of the polytheistic religion of Hinduism). Hinduism is the most dominant religion of Nepal. It is a polytheistic religion as there about three hundred thirty million deities in the Hindu religion.

It is said that this religion existed before human civilization. Every deity here is linked to an act or ceremony and has its importance. People choose the deities they wish to worship daily.  Many Hindu temples are spread around every part of our country. Pinpointing what constitutes Hinduism is complex, with some contending that the religion is rather an umbrella term that encompasses various religions and traditions within it.

Buddhism is the second most followed religion of Nepal constituting 9% of Nepalese devoting towards it. Nepal is the birthplace of the founder of Buddhism, Lord Gautam Buddha.

Buddhism has spread throughout Nepal and the rest of Asia and now has become a major world religion. Many ethnic groups that follow Buddhism have helped preserve Buddhist culture through their artwork and rituals.  This religion is more about the inner journey of peace to connect oneself to reality and experience it. It focuses on the physical and spiritual contentment of a person. Many religious sites like Muktinath and Swayambhunath are important to Buddhists.

This religion was founded by Muhammad who is known as the messenger of God. Islam is the third-largest religion in this world. The Islamic religion was brought to Nepal during the 17th century by the north Indians. Although the first Muslims to enter Nepal can be dated back to the 15th Century when Kashmiri traders came here to trade. Muslims are very devout to their god and can be seen as an example of devotion and dedication.  They strongly follow the rules and regulations of their religion.

Catholic Capuchin friars introduced this religion in 1750. It is the largest religion in the world. This religion is categorized into 3 types: Catholic, Protestant, and Orthodox, there are subtypes within them too. Most of the Christians in Nepal are Evangelical Protestants.  This is the fifth most practiced religion in Nepal and its number is growing day by day. There are 1000s of churches where Christian visit to complete the rules and regulations of their religions.

Apart from the above-mentioned religions, there are other significant numbers of religion in Nepal that are playing their role to make her a multi-religious country. Sikhism, Jainism, Kirats, Tantrism, and so on.