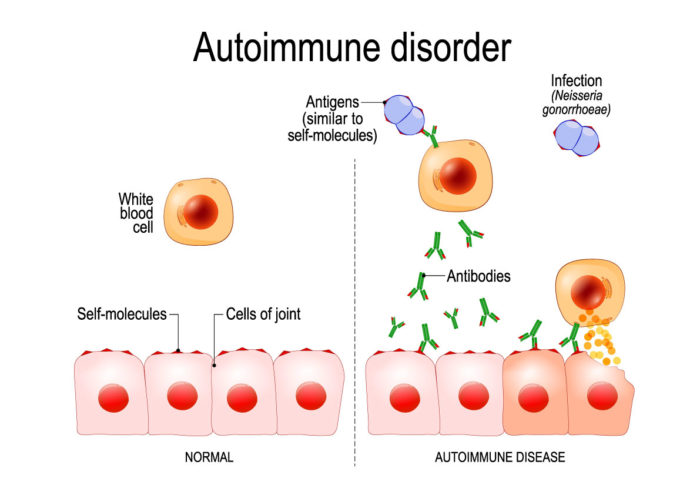 Autoimmunity is the presence of immune responses against self- tissue. It may be harmless phenomenon only by the presence of low-titre auto-antibodies. However, if these responses cause significant organ damage, the autoimmune diseases occurs.

Ayurveda describes this in a slightly different way. Ayurveda suggests that the immune system does not attack the body’s own cells accidentally, but it does so to defend against a form of harmful metabolites of body, called ‘Ama’. Ama is produced in the affected level of tissues. Ama indicates raw, uncooked, unripe, immature, undigested and incompletely oxidized food contents.

Due to the hypo functioning of ushma (metabolic fire), the food which is improperly digested, yields immature Rasa in amasaya and due to retention undergoes fermentation or purification. This state of Rasa is regarded as Ama. It is produced both in cellular and metabolic level.

Autoimmune diseases are usually caused by large amounts of Ama penetrating certain body tissues or physiological systems. In addition, prolonged exposure to poorly digestible food, pollutants, allergens, toxic and synthetic chemicals and drugs is another cause of autoimmune diseases. Poor treatment of the disease and repeated suppression of symptoms without addressing the cause, also accelerates disease progression.

The following factors, alone or in combination with each other, may contribute to the development of autoimmune diseases:

A. The penetration of deep tissues Ama. The reasons for this are as follows:

The digestive system plays the most important metabolic function of the body, and is the basis for all other macro- and micro-metabolic processes that converts and breaking down of all organic substances. Weak digestion leads to the accumulation of incompletely processed metabolites. This, in turn, has an impact on all metabolic processes, allowing the production of Ama, both superficially and on a deeper level rises.

The Dosha are bio-humors that govern all physiological processes in the body. When the Dosha gets vitiated, cause a variety of diseases. Depletion of doshas leading to metabolic disturbance also causes ama.

Suppressing the natural urges to get rid of metabolic waste, leads to physical obstructions in the discharge channels of the body. The resulting accumulations of waste at different levels of metabolism, does the number of toxins rise, which ultimately leads to an increase in the body Ama.

B. Prolonged exposure to incompatible materials

The clinical presentation of autoimmune disease is highly variable. There are distinguished four type of immune response that result in tissue damage.

No single test can diagnose most autoimmune diseases. Combination of tests and a review of your symptoms and physical examination is used for diagnosis.

The antinuclear antibody test (ANA) is often one of the first tests done when symptoms suggest an autoimmune disease. A positive test means you may have one of these diseases, but it won’t confirm exactly which one you have or if you have one for sure.

In spite of use of non-steroid anti-inflammatory drugs (NSAID) and immune- suppressing drugs Ayurveda recommend for use of detox therapy and herbal formulation for the approach of treatment.