Core Of The Yoga Sutras Given By Maharishi Patanjali 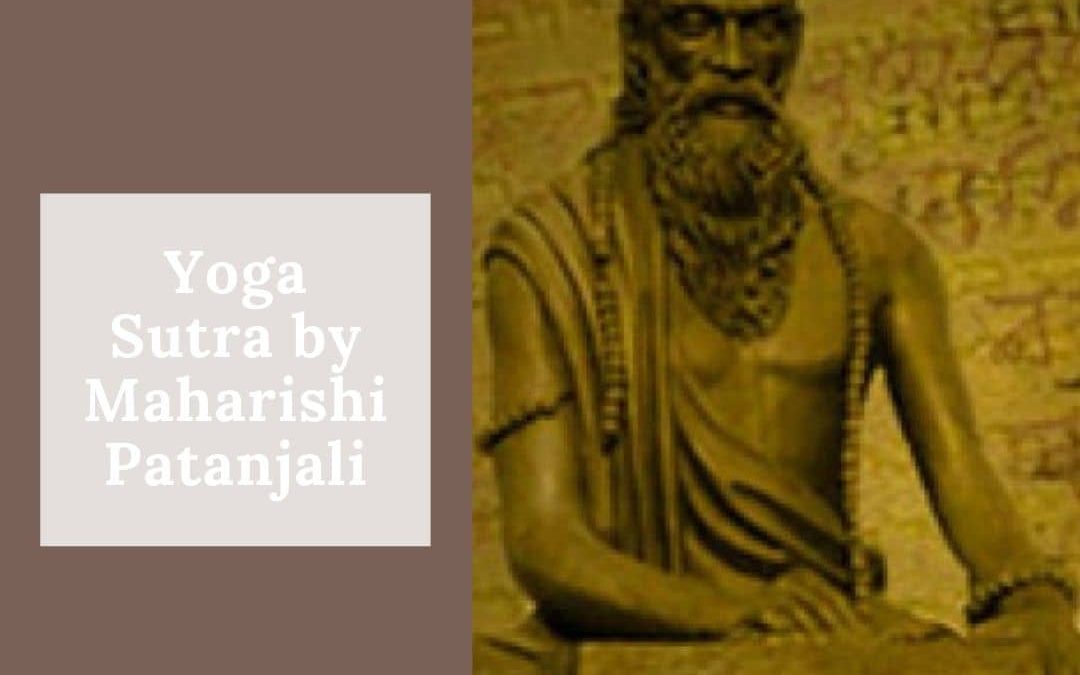 Core of the yoga sutras given by maharishi Patanjali

Sesh Naag has appearance changed from scriptures to scriptures and books to books and pictures to pictures and idols to idols. Some depict, the cosmic snake as 5 heads, some 7 headed and some thousands and millions of heads. It is even said that lord Sesha is the one who balances the planets in heads, when he shifts the heads, earthquakes occur.

Legend goes like this; Lord Vishnu was enchanted by the dance of lord shiva and his yoga. When the eternal Shesha Naag learnt about this, he also wanted to learn the dance and yoga so that he can impress his master. When lord Vishnu came to know about this, he blessed Sesha Naag, with the boon that lord shiva himself will bless and teach him. The gods, further gifted Sheha Naag with the gift that he will take incarnation as a human and teach his learning to the humans. He incarnated with the motive of teaching dance and yoga to the humans in his life time.

A woman named Gonika; Rightful, virtuous, truthful, devotee of gods was meditating so that the gods will grant her the boon of a worthy son. Then after long period of meditation and pleasing the gods. One faithful day a tiny serpent walked to her hand. After it reached her hand, the tiny serpent transformed into a little boy. By this way, it is believed that Shesha Naag reincarnated as maharishi Patanjali.

There are other legends also surrounding the birth and life of maharishi Patanjali. However, there is no actual way of saying that either of this legend is true. Legends or events, that move from generations to generations gets fictionalized or changed. When the end product comes it comes as a very different thing sometimes it is even a complete work of fiction and imagination. Sometimes, it is so bizarre that there is a question that even the legendary figure existed at one point. From the missing dots that gets buried in time, arises conspiracy theories and other fragments of imagination that fill the places of dots.

The case of maharishi is however different. There is plenty of evidence he did exist. Ruling out his birth mysteries and legends. He still is the one who wrote yoga sutras, mahaabhaashya, charakapratisamskrtah and other works.

The book introduces yoga as the medium through which one can achieve true enlighten in their life. The main goal of samadhi pada is to attain detachment(vairagya) through practice (avhyasa). One performs this act through the effort and concentration. The main objective of samadhi pada is to provide meaningful and purposeful life to its practitioners.

The yoga sutras of Patanjali are very beautifully written, it touches and tries to operate with all the delicate that may arise when one gets inclination to the yoga. However, not only the samadhi pada mentions the problem. It also tries to give the solutions who practice, yoga sutra.

There are 51 sutras that samadhi pada teaches. They all have various functions and benefits to the practitioners. The sutras are sectioned and each have distinct functions, unique to others.

The list of yoga sutra on samadhi pada based on their functions are as follows:

The 51 sutras, from introducing yoga to the beginner takes the journey to the stabilization of the mind.
Padma asana and Sukh asana are the most common pose that are used for practicing samadhi.

It is the second chapter on yoga sutra given by maharishi Patanjali. This chapter focuses and highlights the student and his higher self.

The sadhana pada are divided into eight parts. They are also called the eight limbs of yoga or ashtanga yoga.

Yama is the first limb of ashtanga yoga. Yama of ashtanga yoga sutra deals with own principles and moral code. Yama is the ethics of the person what should do and what he should not do? Yama helps a person to see himself from his own eyes.
There are five yamas as listed by Patanjali:
-Ahimsa= The act of non-violence
-Satya= Always Truth
-Asteya= non-stealing
-Brahmacharya= Chastity; free from sexual practice
-Aparigraha= non-possessiveness

Niyama is second limb of ashtanga yoga. Niyama deals with self-discipline and spiritual observances. Meditations, religious aspects are dealt by Niyama anga of ashtanga yoga.
Niyama also consists of five parts:
-Shaucha= The purity of mind and body
-Santosha= Acceptance of what you are and what everybody is
-Tapas= Self discipline
-Svadhyaya= Study of Vedas, Introspection of self-actions
-Ishvarapranidhana= Surrender of gifting yourself to the para brahma

Asana is the third limb of ashtanga yoga sutra. This limb of ashtanga yoga deals with yoga poses and postures. There are many pose and postures of yoga. However, asana ashtanga deals with the pose that one can hold for an exceptionally extended period of time. The pose should be maintained for an extended period of time and should be able to provide mental peace to the one who practice it.

Pranayama is the fourth limb of ashtanga yoga sutra. Pranayama deals with the breath and maintains the balance in the wind element in the body. Wind is the life in all the living beings. The main idea of pranayama is to use that element to its peak. Various steps and techniques of pranayama are there to control and maintain your breath. Pranayama enlightens the mind and soul of the practitioner.

Dhyana translates to meditation. Dhyana is the seventh limb of ashtanga yoga sutra. Beyond the concentration of dharana lies the meditation of dhyana. After going beyond the concentration, one reaches to the state of dhyana. Dhyana is the state where one is free from negative thoughts, uninterrupted by the outside world, reflective and calm as the water in the pond. To the outsider one in dhyana seems to silent and non-active but they are connected to the world more than ever.

It is the eighth and final limb of ashtanga yoga sutra. Samadhi is the salivation and the final destination of the ashtanga yoga practitioner as per saga Patanjali. Samadhi is the state where one joins with the universe. They attain inner peace, joy, and happiness, where their individual consciousness is completely linked with universal consciousness. The jivaatma who attains samadhi is linked with the Paramatma.

Vibhuti is the penultimate chapter of the yoga sutra given by maharishi Patanjali. Vibhuti deals with dedication to the practice and self-discipline. Vibhuti pada contains 55 sutras in total.

When a person completely masters sadhana pada then only they can reach Vibhuti pada. Especially the last three limbs of ashtanga yoga are the most important field before coming to Vibhuti pada. Dharna, Dhyana and Samadhi are the three among the eight limbs which acts as the basic foundation for Vibhuti pada.

Vibhuti pada is the state where the focus and concentration of the mind manifests the new power. Dharna, Dhyana and Samadhi when completely mastered and collectively one give birth to one’s siddhis.

(Siddhi- Siddhi are the supernatural, magical, elemental abilities that acquires by his/her accomplishment through yogic, spiritual path and unlimited devotion.)

When one gets his siddhis, they gain abilities like demigods. They can fly in the air, live inside water, fire can’t burn them, able to create what they want with just simple thought. These are some of the accomplishments of the one who has attained the siddhis.

Due to the stage of manifestations of power, the third chapter Vibhuti pada is also called as the chapter of power or manifestation.

Vibhuti pada further describes that these siddhis are not some kinds of boon or superpower. It is what we and our body was always capable of. We tangled in our lives and bound to our worldly desires were never able to realize it. When one removes ego from themselves, and remove other desire-based obstacles powers start to develop within them.

Vibhuti pada is great height and a remarkable destination in the journey of yoga sutra. However, it still is not the ultimate destination. When one achieves this, they should go even further to kaivalya pada.

One who achieves the siddhis may enchanted by their powers so much that they cannot see beyond them their whole lives. One who have achieved siddhi, should allow himself to be their master and a part of themselves. One who allows siddhis to be their master and all of themselves are awaiting a great disaster. In Indian and Tibetan stories where one becomes so full of themselves that they misuse their power and siddhis. This has led to generations of negative consequences.

Kaivalya pada is the last and final chapter of the yoga sutra given by the maharishi. Kayvalya pada contains 34 sutras in total. By the use of these sutras in Kaivalya pada the yogi achieves Nirvana or Moksha. It is the state of liberation and freedom from suffering. It is the stage where one separates the soul from the primal matter of the universe. When one separates his ego and achieves siddhi and go beyond it, then they reach kaivalya pada. Then the one who can separate their soul from the body that is made by the five prime elements of the universe then they reach kaivalya pada. Those who master this pada are referred as Kevalin.

The main motive of achieving kaivalya pada is becoming free from the cycle of rebirth. Then becoming one with universal energy by knowing ones true and eternal self.

Attitudes of friendliness, Compassion, encourage virtue, Resistance of the impure are the ways by which one can achieve kaivalya pada as mentioned by the maharishi Patanjali. The one who have achieved Kaivalya pada are the only one who are truly free. They are free from every bindings and attachments that the world has to offer. They reach to the true state, knows their inner self, universal energy and much more.