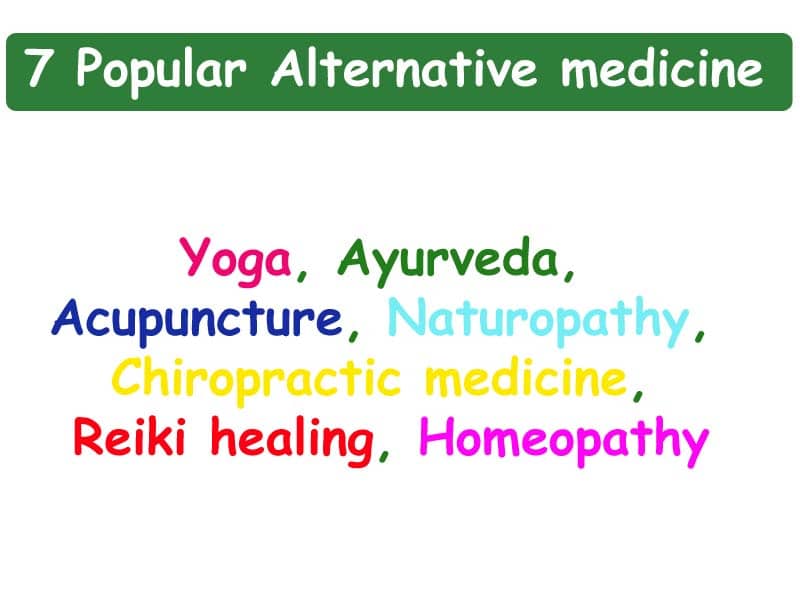 Health has been a common theme in most cultures since a long period of time. Various concepts and methods came into existence that described how to attain and maintain health. Such diverse medical and health care practices which have historic origins outside conventional medicine are included under the domain of alternative medicine.

With increased public access to sources of information, products and services, public expectation of health and health care services has been altered as never before. In the pursuit of health, large number of people are using alternative medicine and the number is increasing year by year. Here we have listed out seven most popular alternative medicine of our times with brief descriptions.

No doubt, Yoga comes at the top of the list when you are talking about alternative medicine. Yoga has flourished almost all over the world in a very short period of time and its popularity doesn’t seem to decline.

Yoga in actual is an ancient Indian philosophy devised with the aim to provide spiritual salvation to individuals. Amongst the eight aspects of original Yoga concepts, three of them are primarily focused in modern day yoga practice: asana ­– stretching exercise, pranayama – breathing exercise and dhyana – meditation. In addition are the six cleansing practices known as shatkriya which originally comes from Hatha yoga school.

Clinically, the combination of these practices has shown to be much more effective in alleviating chronic pain, improving respiratory capacities and stress related problems like depression and anxiety. But more than this, the increasing rate of attraction towards yoga has to be attributed to the growing demand of spiritual dimension of health, which yoga teachings seems to satisfy practitioners convincingly.

Sharing the common roots of origin with yoga, Ayurveda is another uprising practice in the domain of alternative medicine. Ayurveda which means “knowledge of life” bases the concept of health and disease on the theory of tridosha (three humors). Three dosha namely vata, pitta and kapha are considered to be responsible for health when in harmony and on the other hand disease is explained as the disturbance in that harmony.

The ultimate aim of Ayurveda as classics define is to cure the diseases of ill ones and sustain the health of healthy ones. To fulfill this aim Ayurveda designs the models of management, all based upon reinstating or sustaining the harmony of tridosha. Herbo-mineral medicines, detoxification therapies and counselling on dietary and lifestyle are the three main aspects of treatment models.

Acupuncture is a Chinese medical practice with a history of use that date back 2000 years. The literal meaning imply stimulating points and thus it involves the insertion of hair-thin needles into energy channels called meridians. Usage of electric stimulation in addition can also be observed in practice.

The main principle is that there are pathways through which energy flow throughout the body and using acupuncture needles on energy spots, pain and stress can be relived. Acupuncture has established itself as one of the most promising alternative medicine in the management of chronic pain.

In response to the ineffective conventional treatment methods in late eighteenth century, triggered a movement called Natural Cure Movement which aimed for safer and more natural approaches. Thus originated the naturopathic medicine from the central Europe.

Chiropractic medicine was founded by Daniel David Palmer in 1895 in Missouri. He believed that partial dislocations of vertebrae cause disease by pressing the key nerve roots and thus adjustment of spine can be effective in curing diseases. Since then it has been in practice and is the most widespread alternative medicine practiced in US.

This practice emphasizes manual therapies for treatment of musculoskeletal problems and is the most recommended non-pharmacological method of treatment for low back pain. Chiropractors also advise on nutrition, exercise and other healthy approaches.

Reiki falls under the sub category of energy medicine under alternate medicine. A Japanese technique of healing, the main concept behind the practice is based upon some form of energy which flows through individuals that runs our life. It believes that energy gets blocked due physical or emotional trauma and this block causes illness.

Homeopathy is a medical system originated from Germany developed by Samuel Hahnemann in the late eighteenth century who postulated he theory of “like cures like” – compounds which produce side effects in a healthy person may be used to treat or prevent such symptoms in an ill person if administered in very dilute solutions.

A homeopathic practitioner takes a detailed history of patient’s complaint and on the basis of symptoms, oral remedies are prescribed. Homeopathic practice is mostly used by patients suffering from common cold, allergies, rheumatoid arthritis, headaches and other chronic illnesses.