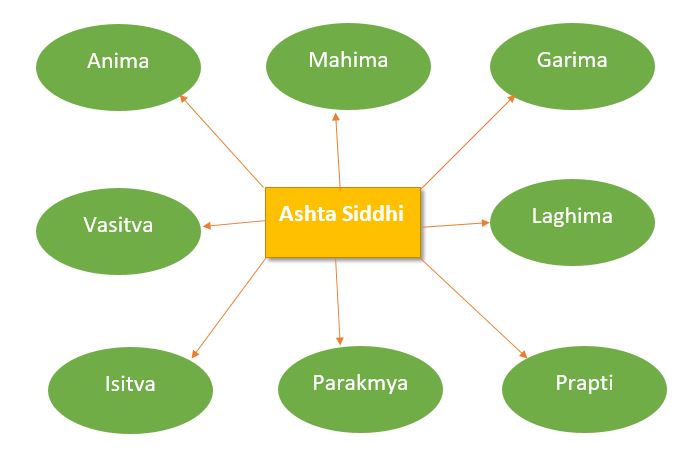 Astha siddhi are the eight divine knowledge that gives the user absolute power over everything in the universe. The name ashta siddhi can be heard or read in various Hindu mythology-based movies, series, or scriptures. Lord hanuman and lord Ganesh are the gods who use ashta siddhi as their main source of power and can also grant them to others. Asthta siddhi is not common word that many of us have heard, unless one is dedicated and fancies such things.

In mythology there are many incidences where lord hanuman used the siddhis to destroy demons, complete his tasks and many more. Many sages were also bestowed the power of siddhis and hence gained various god like abilities.

Anima, Mahima, Garima, Laghima, Prapti, Prakamya, Isitva, vasitya are the eight siddhis. They each have special function and provide special ability to the one who performs it.

Following are the ashta siddhi

Anima grants its user the ability to decrease their size. Using anima, the siddhi user can attain miniature forms, many thousands, and thousands of times smaller if the user demanded. Lord hanuman has used this ability many times during spying. Anima is the first siddhi that need to be mastered to attain the ashta siddhis.
We should decrease our ego, greed, and other negative things in life by anima.

Mahina, the second among the ashta siddhi is complete opposite ability than Anima. Mahima, grants its user the ability to increase their size. Using Mahima, the siddhi user can attain gigantic forms, many thousands of times greater is the siddhi user wishes so. Lord Hanuman and lord Ganesh have used this ability during battels and defeating to evil doers. After Anima is mastered, then Mahima can be mastered.
We should increase our confidence, goal, and open mind by using Mahima ashta siddhi.

Laghima can grant its user the ability to decrease the weight. It is the opposite side of coin to Garima, which is complete ability when attained as whole. Using Laghima one can make their body even lighter than feather and float in the air. Lord hanuman and other demigods used their abilities to float in the air.
One’s spirit should be light and as free as the body becomes when using Laghima ashta siddhi.

Prapti is the fifth ashta siddhi. While previous ashta siddhi allowed users to manipulate their own body, prapti lets user manipulate the surrounding. Prapti makes the user attain absolutely anything they desire immediately. One can create anything they need instantly manipulating the molecules in the surrounding.
One should try to attain peace; happiness as mental peace is the greatest thing one can gain in life.

Parakmya provides adaptability to the one who attains this ashta siddhi. One can be so adapted that they can live underwater, extend their life many times than original, survive in extreme colds and heats. Lord hanuman granted this siddhi to many demigods and sages, so that they can do more good works.
One should be adaptive and try to find happiness in any situation like Parakmya ashta siddhi provides to the users.

Isitva grants the user to influence the pancha elements in nature (Panchamahabhut). After attaining Isitva, the wind moves with their will, earth asks their will, fire will not burn them. The nature listens and obeys the command of Isitva user.
One’s presence should as be as strong as the Isitva ashta siddhi, which will change environment as their will.