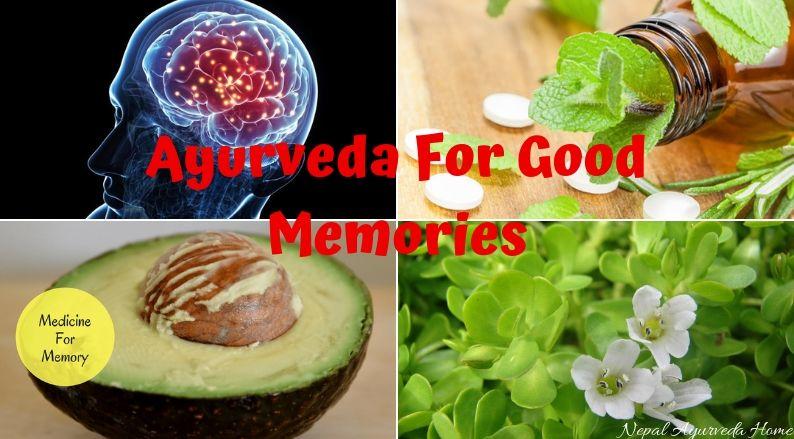 Memory is the ability to store and retrieve information and past experiences. We are what our memories are – they are our experiences, our relationships, our successes, and our failures. Memory has a great significance in Ayurveda. Ayurveda considers the deterioration of memory as one of the principle cause for the origin of disease, and a good memory as one of the signs of individual leading a healthy life. Concepts in Ayurveda emphasizes on the use of nootropic medicines and therapies and practices to alleviate stress and increase concentration for improving one’s memory. Methods derived from Ayurveda that aids to boost memory can be summarized below.

According to Ayurveda, Ashwagandha constituents provide a youthful state of physical and mental health and an increase in happiness. Pharmacological studies on methanolic extract of roots of Ashwagandha has shown effects like dendrite extension, neurite outgrowth, and synapse formation, all of which are essential to promote memory formation in the brain.

One of the most widely used medicinal herbs, turmeric is recognized usually for its antioxidant, anti-inflammatory, and cancer chemo-preventive properties attributed to its vital constituent curcumin. Along with these, curcumin helps to reduce oxidative damage and improve cognitive functions related to the ageing process. Studies on curcumin have also shown significant improvement in performance on sustained attention and working memory tasks.

In Ayurveda, Brahmi has been prescribed for insomnia, anxiety, epilepsy and for enhancement of memory and the intellect. Bacoside, major chemical constituent of this plant has been found to inhibit anti-oxidants that help to protect neural cells of the prefrontal cortex, hippocampus, and striatum against cytotoxicity and DNA damage. Bacoside also enhance cerebral vasodilation, leading to improvements in total memory score.

Shankhapuspi has been considered as the best medhya Rasayana in Ayurveda. Studies on ethanolic extracts of Shankhpushpi points to increased acetylcholine content in hippocampus along with a significant increase in the number of dendritic intersections, branch points, and dendritic processes arising from the cell bodies of neurons, thus enhancing memory by increasing neurite outgrowth.

Mandukparni is one of the most widely used nerve tonics. Rather than neuroprotective property, Mandukparni inhibits memory impairment by inhibition of the acetylcholinesterase enzyme. This further inhibits the breakdown of acetylcholine thereby increasing amount and duration of action of this neurotransmitter in the nervous system i.e. playing an important role in arousal, attention, memory and motivation.

Nasya karma is one of the therapeutic procedures under Panchakarma, in which the drug is administered through the nasal route. The nose is considered as the doorway to the brain in Ayurveda. Interestingly, nose is connected with nerve plexus of an olfactory nerve which is chemoreceptor in nature and furthermore, the olfactory nerves are connected with the higher centres of the brain, i.e., limbic system, consisting mainly of the amygdala, hypothalamus, thalamus etc. Hence, the drugs administered through the nose can stimulate the higher centres of the brain to show action on the regulation of endocrine and nervous system functions including memory.

Shiroabhyanga simply means oil massage on head. It is an effective therapeutic method to relieve the effects of mental stress on the head. The soothing effect of Shiroabhyanga stimulates the parasympathetic action in the nervous system which leads to the release of acetylcholine, alleviating stress and enhancing attention and memory.

According to Ayurveda, sleep is a part of Traya-Upastambha. Classical texts describe that sleep helps to get proper learning capacity and hence aids in sustaining the memory. Memory processes have been shown to be stabilized, enhanced and better consolidated by nocturnal sleep and even daytime naps.

Learning and memory are closely related to each other. Learning is associated with the acquisition of information while memory is associated with retrieving that acquired information overtime. Without any input there’re is no chance of recollection. So indulging oneself in study or skill gaining tasks helps in initiating the process of formation of memory. Ayurveda suggests the concept of dhi (acquiring knowledge), dhriti (storage of knowledge) and Smriti (recollection of knowledge). Among these smriti is related to memory which is complemented by dhi and dhriti. Hence, learning habit has been emphasized by Ayurveda in order to improve memory.

Yoga emphasizes mind-body integration and tries to attenuate stress by increasing the relaxation response through activation of the parasympathetic nervous system. This decreases cortisol levels and returns the mind, body and brain to a state of balance, which can enhance cognitive functioning.

Some Yogic Practices That Enhance Memory Can Be Summarized As:

From a macroscopic point of view, prolonged stress can have a deleterious effect on the brain deteriorating cognitive function and memory. Oxidative damage due to radical oxygen species at the molecular level also results in a similar consequence. So, the holistic approach of ayurvedic medications, therapies and regimen can be a convenient measure to improve memory power.