Importance Of Ayurveda For Seniors 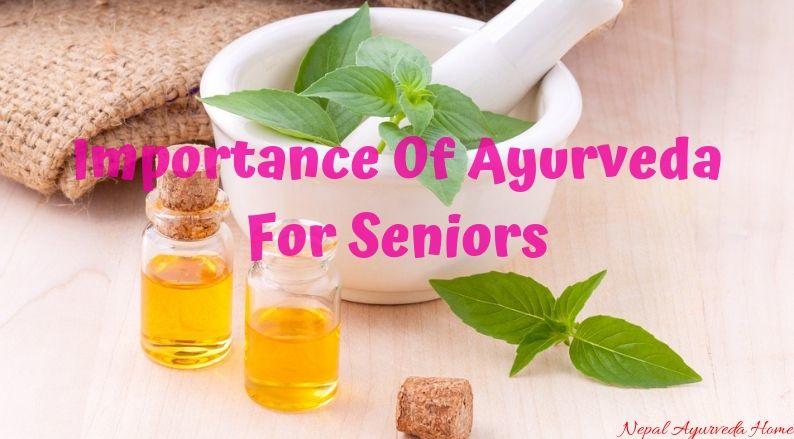 This article revolves on what ate the importance of Ayurveda for seniors. How to change our dietary habit according to the season, how our digestive system works based on seasonal change.

Ayu (life) in Ayurveda has been defined as the time span during which co-ordination between four essential components namely – body, senses, mind and soul run. During this span, various changes occur which are natural and inevitable.

The classical texts of Ayurveda divide life stages into three categories according to the types of changes that occur throughout those stages – Bala (up to 16 yrs), Madhya (16 – 70 yrs) and Vriddha (beyond 70 yrs). The vriddha stage or ageing is accompanied by the process of decay and manifests degenerative changes at the physical, physiological and psychological level.

All these changes hamper the homeostasis of an individual and create an unpleasant state, hence Ayurveda considers ageing as a disease. Classical texts have categorized ageing under palliative disease and its management has been summarized into 2 main therapies.

Excellent Therapies in Ayurveda For Seniors for Their Anti-Aging

Rasayana-tantra is one of the branches of Ashtanga-Ayurveda which deals with the longevity of life, increasing physical and mental strength, developing immunity and alleviating senility and maintaining youthfulness. Since ageing is accompanied by degenerative changes, increased stress, reduced immunity and declining memory the inherent properties of Rasayana drugs help to alleviate these effects.

The word Rasayana (rasa + ayana) refers to the circulation of nutrition needed to provide nourishment to the body tissues. Rasayana drugs are directly added to the pool of nutrition and in turn help in improved tissue nourishment. Asparagus, Milk, Ghee etc.

Panchakarma therapy is a unique therapeutic technology of body detoxification which forms the most fundamental component of Ayurvedic treatment.

Since constipation is a common problem in aged patients Mridu Virechan (mild purgative) is best suited. Among a variety of Vasti, Matra vasti is a harmless and standard one which can be used routinely. Other vasti such as Greeva vasti, Kati vasti and Janu vasti can be utilized in the management of cervical spondylosis, lower back pain, osteoarthritis of knee etc. which are commonly seen in elderly patients. Nasya (nasal insufflation) is beneficial in headache, stress reduction, improving mood and emotions.

Other than these therapy diet and life-style management play an equally important role in the management of ageing.

Dincharya (daily regimen), Ritucharya (seasonal regimen) and Sadvritta (code of conduct) described in Ayurveda can be an ideal measure for proper management of daily life routine.

Ritucharya or seasonal regimen is based on the observation that the physiology of the body shows relative changes with changes in seasons, thats why to adapt properly with the changes of season, we need to manage our different dietary habit and need to change the lifestyle.

From Sishir to Grishma (Mid-January to Mid-July) body strength and power to digest by digestive system decreases slowly and gradually, while exactly the opposite happens from Varsha to Hemanta ritu (Mid-July to Mid-January). We need to adjust our dietary habit and lifestyle.

Sadvritta consists of principles of ethics of every aspect of life. It includes being truthful and compassionate, adopting non-violence, acquiring the company of humble, kind and moral people, controlling senses and appetite etc. These conducts help an individual to cope with other members of the society which can help to relieve loneliness observed in elderly patients.

Increased life expectancy due to advances in medical science is resulting in an increasing population of the aged. The burden of chronic disease and disability associated with ageing is increasing day by day. In order to manage this burden and to avoid the effect of ageing, a normal elderly person should take panchakarma therapy followed by Rasayana, taking in account – dietary and lifestyle management according to Ayurveda in order to promote overall health.