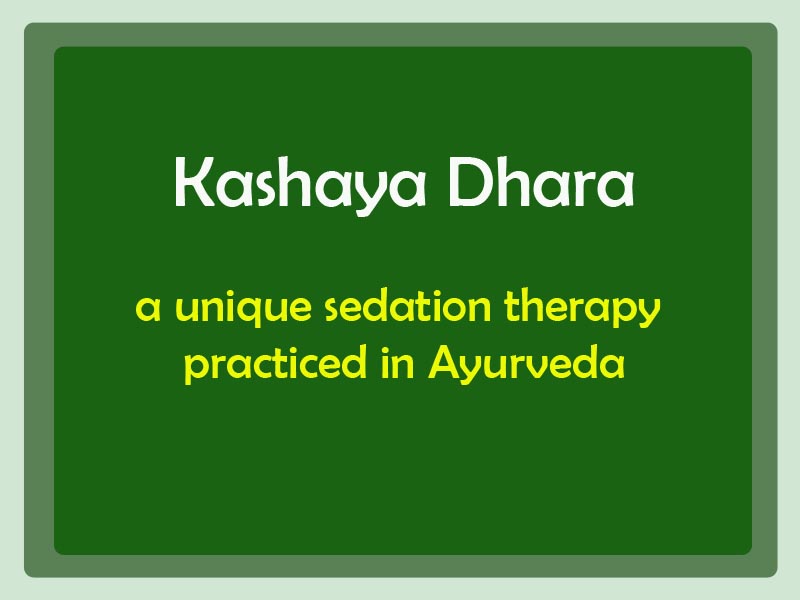 How is Kashaya Dhara given?

First of all, the decoction is prepared according to the nature and the condition of the patient.  The receiver is made to lie supine on a wooden table comfortably in a quiet and serene environment.

A continuous stream of the decoction is poured from the vessel placed at a certain height. The decoction that is poured should be made warm tolerable to the receiver. Other than the decoction, medicated oils, ghee, milk or butter milk may also be used.

The therapy session includes gentle massage interventions provided by the therapist along with continuous pouring of decoction is made to pour for about 45minutes per session. After the end of the session, the receiver is advised to rest for a while and then take a hot water bath.

A therapeutic course of Kashaya Dhara may range between 1week to 3 weeks.

As mentioned earlier the therapy session of Kashaya Dhara involves pouring of medicated decoction over the body continuously for a certain period of time. So most probably the therapeutic action depends on:

The pouring of warm decoction on the body surface first of all improves perspiration. When the decoction is being poured from a certain height, the pressure created. Thus created pressure along with the warm temperature of the decoction makes the skin pores more permeable for the active ingredients present in the decoction.

The sensation of pain is mitigated by the warmth and pharmacological properties of the used herbs in a counter irritant manner.

At the same time, warm temperature and pressure also aids in vasodilation. This would imply there will be increased blood flow in the region such that the nutrition is passed to tissues and metabolic wastes from the tissues are exchanged properly. Thus nourishment and removal of toxins goes alongside.

The continuous and rhythmic flow of the decoction over the forehead helps in relaxing frontalis muscles, lowering the activities of sympathetic nervous system and normalize the whole body physiology, thus relieving mental stress and inducing sleep.

The sedative therapies practiced in Ayurveda will be incomplete without Kashaya Dhara. According to Ayurveda he serenity of the body is disturbed due to aggravated vata. The underlying classical concepts behind Kashaya Dhara is aimed to normalize the vata dosha in our body. Even most of the formulations in the decoction used for the purpose of Kashaya Dhara will contain vata relieving drugs.

In an age of hurried times, we have been bound to carry the load of mental stress, further inviting psychological and psychosomatic problems. Kashaya Dhara can be a cost-effective choice to rid yourself from the unnecessary burden that your mind is carrying and re-energize yourself to live some happy and cheerful moments.