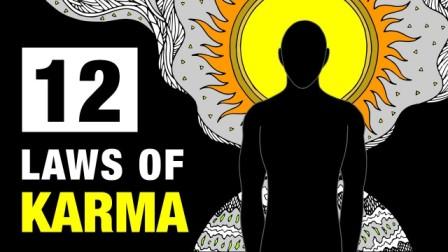 The universe is very mysterious. There are so many things and they form so many relations with one other that when thought about that one will be overwhelmed. We even as conscious beings and enhancing our knowledge from thousands of years have only begun to scratch the surface of how the world and universe work.

There are very mysterious energy and forces, some with our intelligence and time we have come to understand and figure out. While there are some which are yet to be figured by us and have kept us in the dark from the beginning. Among, the many laws of the Universe there are the Laws of Karma.

karma is a very vast world and the topics Laws of Karma are also very vast. There are various meanings of the world of Karma. Karma was originally a Sanskrit word, but now it is used in English literature also as it was added quite a time ago. The true meaning of Karma is the duty, and the duty can be related to anything like I am hungry, then my karma or duty is to eat. This is the meaning in a minor sense.

However, Karma is mostly associated with the cosmic duty that we all are supposed to follow. The cosmic duty of karma is done by remaining inside the boundary of Dharma. We all have our Karma, the non-living also have their karma. However, we as conscious beings have more karma to perform as we are the only ones who can choose our karma and duty to the world.

Another meaning of karma that is widely used as is the result of the action performed. Good or bad, mediocre, or legendary every action will yield a result and they must face it. The universe works in such a way that what you give to the world, the world will give the same thing back to you.

If a person gives love and care to the world without expectations and ulterior motives, then they will get it back maybe more than they had given. This is also true if one gives negative things and emotions to the world, they will get the same things back. This is Karma or one of the basic laws of Karma.

There are various laws of Karma and all these focus on the nature of humans and the nature of the world. The world and universe themselves share various kinds of energy and laws with the living and non-livings in them. By understanding and implementing these laws and energies one can understand life itself and gain many things from it.

There are a total of 12 laws of Karma and these are as follows:

The law of cause and effect

The law of creation

The law of creation is the second among the laws of Karma. This law signifies the role and needs for action in our lives. Our action is every activity that we do in our life, no matter how small or how big we perform many actions. It is true to say that we are alive by our actions and we are defined by our actions.

The second law of karma defines the importance of action or to be precise the importance of right action in our lives. Many things can be gained and achieved in life it is true, but nothing can be achieved without doing anything. To be something in life, to achieve something in life, or even to be alive we need to act and we need to act right because everything depends on it. Also, we humans are all born equal it is our actions and our thinking which separate us from one another.

The law of humility

The law of Humility has a special place among the laws of karma. It can be also called the law of acceptance. There is past, present, and future. The present and future are changeable to our will but the past cannot be changed. No matter how much the effort or trying what has done is done. It may be how much bad or horrifying but it cannot be changed and that is the ultimate rule. People need to accept what happened in the past, learn from it, and move forward from it. This is what the humility law of karma teaches.

The law of growth

The law of growth of laws of Karma aids people to have a better look at themselves. It gives the people a clear perception about themselves which they can use for their growth. The only one who we can profoundly change in this world is we and the growth law of karma tells that. Before changing others, before growing others one should change oneself and make themselves grow.

The law of responsibility

The law of connections

The law of connection holds a special place among the laws of karma as it establishes a connection between everything in our life. Time is a path on which after moving we can never go back. There is past, present, and future that have distinctive nature.

The law of focus

Focus is the amount of dedication to a certain thing or activity. It is necessary for many things in life as without it is hard to achieve the wanted things in life. Even simple activities need a considerate amount of focus in life. Also, the focus law of Karma tells us to focus on one thing at a time as focusing on too many things at once can lead to an accident.

First, make a list of the priorities in life that need immediate attention and start with focusing on them. After that move to next and next with one at a time to learn focus. Also, the focus should be on positive things in life and try to focus on them and not the negative emotions and things.

The law of giving and hospitality

Hospitality and the nature to share are some of the best emotions and habits that are present in a human being. The laws of Karma also include the law of giving and hospitality. It says that you need to be able to give away the things that you believe in and believe that the world and everyone in it need the thing. Like if you want everyone in the world to help each other, you need to start giving it to everyone in need who is around you.

The law of here and now

Here and now is an especially important aspect of life as the present is most important among the future and the past. Past is something that has happened, no matter what it cannot be changed. Future is going to happen no amount of worry can also change it. The only thing we can change is the present making the future safe and filled with happiness.

However, some are too attached to the past and too scared of the future that they cannot live in the present. One should feel privileged that they are well and good in the present and can change their situation in some time. Instead of worrying about which cannot be changed and which still has not happened yet, one can focus and enjoy here and now. The here-and-now law of karma lets one enjoy the present.

The law of change

Change is the law of nature and the law of Karma. Change is inevitable, it is the only thing permanent in the world. What was does not look like what it is now and what is now won’t be the same in the future? This is the ultimate truth and change must be accepted with open arms. Not just in the world change is imminent in the life of people also and occasionally, they need to break the cycle. Sometimes something just does not work, there is nothing wrong nothing unacceptable but it just will not work and there is not anything at all that can be done.

The law of patience and reward

Something needs time and gradual effort is needed to attain the permanent result. Patience is one of the most important things needed in the life of a person. Everything needs time and some need it more than others. No matter how much effort you apply in sowing the seed it is not going to turn into a plant today, it is going to take time.

No matter how healthy practices or healthy food you eat in one day, you are not going to have a healthy body. The plant will grow and yield fruit in its own time and it is not going to be changed. Also, by continuous effort and eating healthy every day you will have a healthy body. The patience law of Karma, tells the need for patience in life and the reward that comes with the right action and patience.

The law of significance and inspiration

The law of significance and inspiration is the last of the twelve laws of Karma. The world is extraordinarily complex and lots of living beings live in the world. All of us have the part to play here and our role in the world. There are giants live elephants while there are small insects like bees and ants. Looking at the size of the actions the massive actions of elephants will always overshadow the actions of the ants and bees.

However, looking like that is not the way of the law of Karma. The elephants have their role in the world and so do the bees and ants. Both are needed to run a healthy and good ecosystem. The elephants complete the large and heavy works that can be easily seen while the bees and ants perform the tasks that are small but equally important. No one is lesser compared to others and are completing their given duties.

Also, one needs to look for inspiration from others occasionally. Sometimes it is hard to gather the courage and keep going on your path. Then look around the world to get the inspiration, take the inspiration from the hard-working ants, the very in-duty bees, and everything. If one looks clearly and deeply even the standing tree will give inspiration and the strength to go on.