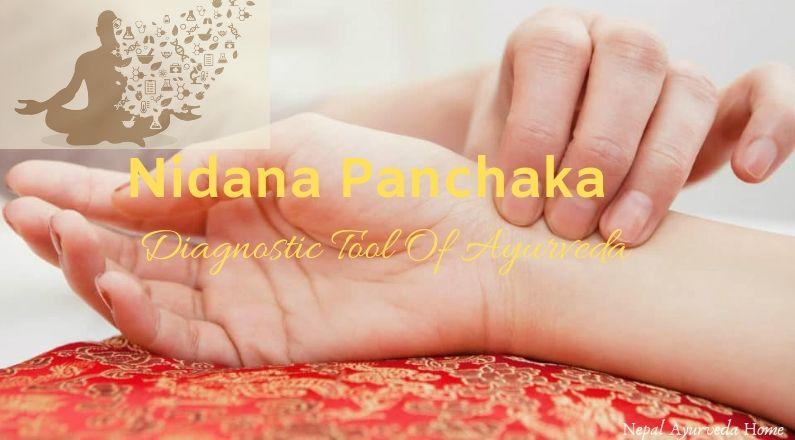 Diagnosis of a condition is always given prime importance in Ayurveda. The various fold of examination of the diseases and the diseased are thus explained so that the physician can correctly diagnose and effectively treat a condition. The five basic methods that are used for a better understanding of a disease is referred to as ‘Nidana Panchaka’.

The word Nidana in Ayurveda is basically used in two perspectives. First is the aetiology or the causative factor of certain disease or condition, another is the diagnosis of the pathological condition. We have five folds of a diagnostic tool as propounded by Ayurveda classic texts- Nidana Panchaka, which gives us an idea from the aetiology to the actual manifestation of the disease. Among these, the first one is the Nidana signifying The cause.

It is the cause that leads to accumulation and vitiation of doshas in our body, thus acts as a precursor and initiator for a disease. Had we not consumed the Nidana, we won’t suffer from a disease. In Ayurveda, the unwise use of food and regimen are said to create an imbalance in doshas and the body tissues, and this disbalance in time course happens to be a pathologic condition. Like properties increases and vitiates a dosha. For example, coldness, dryness, pungent and astringent tastes, over exercise and overindulgence in sexual activities increases Vata dosha, hence they can be Nidana of a Vata disease.

Among many types of the Nidana explained, the faulty use of our senses, time and intellect as termed as Asatmendriyartha Samyoga, Parinama and Pragyaparadha are the chief ones.

Purva translates to prior to and rupa translates to the symptoms. The pre-symptomatic stage of a certain disease is the Purvarupa. The sign and symptoms that give an indication of the disease manifestation are called prodromal symptoms. The vitiated doshas that spread and infiltrate in a defective, susceptible site in the body system show some subtle changes in the body that indicate the future progression of the disease. It is easier to eradicate a disease if the Purvarupa is identified and actions are taken.

For example, general fatigue and lethargy occur prior to fever indicating towards fever. To be specific, one has excessive yawning, burning sensation in eyes and loss of appetite in Vataja, Pittaja and Kaphaja fever respectively. Like rainfall is predicted seeing a dense cloud in the sky, the disease can be predicted by observing the Purvarupa in a subtle manner.

It also helps to distinguish between two conditions having identical aetiology.

When the Purvarupa is expressed properly in a person, it is known as rupa. After the bio channels in our body gets polluted with the entangled dosha-Dushya, the signs and symptoms of the disease manifest as rupa. It indicates that the disease is more pronounced and helps in actually recognizing a disease.
For example, Increased temperature and absence of sweat occur in rupa stage of Jwara-fever.

It is also a tool for diagnosis where certain medicines, food and regimen are advised to a condition before it is finally diagnosed. Favourability or unfavorability of the medicines, food and regimen helps to reach the final diagnosis. For an example, when osteoarthritis and rheumatoid arthritis are the differential diagnosis, Oleation can be advised; If the arthritic pain is aggravated by Oleation, it is rheumatoid type, and if the pain is relieved, it suggests osteoarthritis. Similarly, quinine given as a therapeutic test in fever, if subsides the fever, Malarial fever is confirmed. This way, the factors- diet, medicine and regimen help in diagnosing disease with puzzling and bizarre manifestations.

Upasaya can also be a part of treatment. E.g. day sleep advised in a Vataja disease can be a hetu biparita bihara: regimen opposing the cause, one among the 18 types of Upasaya described. Here, day sleep helps decrease the Vata and increase the Kapha thus creating a balance. Similarly, Sthambhana by the usage of a Kutaja in diarrhoea is a vyadhi biparita aausadh. 18 different types of these therapeutic test are described as the diet, medicine and regimen that would oppose or favour the cause, disease or both. The diagnosis is confirmed on the basis if those proved to be aggravating or relieving to the condition.

All the changes that undergo inside the body after the consumption of the aetiology to the appearance of the signs and symptoms are termed as Samprapti. It incorporates how the doshas aggravate, how they spread, localize and give rise to the disease. All the Six stages of pathogenesis: Disease progression fall under Samprapti.

These five folds of examination of disease give the physician an absolute idea of the disease helping them to reach the diagnosis. Proper diagnosis is the base for the appropriate disease management because without actually identifying a disease, one can never treat it, instead may render inappropriate treatment leading to bad prognosis.

The first line of treatment in any disease is the avoidance of the aetiology, that is why the knowledge of nidana is essential. The extent of purvarupa and rupa help in the differential diagnosis as well as to determine if the disease is curable or not. The more the symptoms are present, the harder it is to cure the disease. Upasaya helps in finally diagnosing a condition with mysterious symptoms and also sometimes serve as a part of treatment. Samprapti gives the idea of the disease progression and the factors involved in detail. The skill, strength and reputation of the physician depend on proper diagnosis and Nidana panchaka proves to be of utmost importance in the diagnosis of a condition as well as management and prognosis.