Relation Of Ayurveda And Nepal 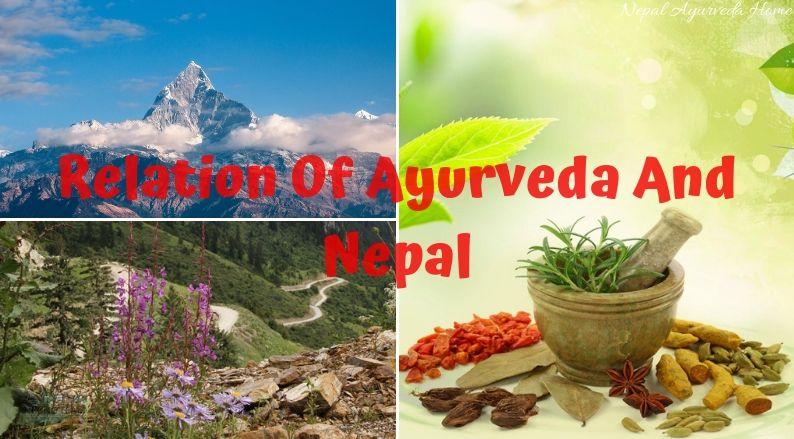 Overview The Relation Of Ayurveda And Nepal

Ayurveda is an ancient practice of medicine native to the sub-Indian continent. It is considered to be the oldest of the traditional system of medicine and has survived and flourished from ages till date. Ayurveda approaches in a holistic way to promote the health and cure the diseases by integrating body, mind and soul through Ahar (diet), Vihar(lifestyle) and Aushadh (medicine). Classical texts of Ayurveda preach that knowledge of Ayurveda has been derived from all four Vedas but utmost importance has been given to Atharvaveda. Even Kashyap Samhita considers Ayurveda to be the 5th Veda. The basic principles of Ayurveda have been derived from the six Vedic philosophies, among which Nyaya, Vaisheshika and Samkhya have high influence. Not to forget, along with these philosophies land of Nepal has a great significance in shaping the texts of Ayurveda which will be discussed below.

Ayurveda and Nepal hold a kind of bonding from ancient times. In the first chapter of Charak Samhita, we can find the verses speaking –

“When diseases started impairing life, creating obstacle in penance, abstinence, study, celibacy, religious observance and life span of mankind, the holy sages, out of their compassion for creatures, gathered at an auspicious place near the Himalayas.”

Great portion of Himalaya lies in the northern territory of Nepal and hence it is believed that this conference had been held somewhere in Nepal. Charak Samhita has indicated more than 50 sages in that conference who were there to discuss the solution of the diseases that had appeared.

Similarly, the same text has also considered the Himalayas as the habitat of medicinal herbs with superior qualities.

Other references related to Nepal can be found in another well-known text Sushruta Samhita. While describing a variety of sugarcane, one of the variety has been named Naipala after Nepal, probably because of its origin from Nepal. Similarly, in the opening pages of Uttartantra section, Sushrut has referred that “the subject matter of the Shalakya-Tantra (Diseases of the eye, ear, nose and throat) will be described in this particular section as narrated by the king of Videha”. The capital city of Videha is now famously known as Janakpur (named after the same king of Videha – King Janak) which lies on the south-east region of Nepal.

Alike these, synonyms for copper and arsenic products have been named after Nepal in various text-books of Ayurveda, probably because of their higher availability in this region.

Nepal has been abode to many ancient sages. Ved vyas the author of greatest epic tale Mahabharat & Geeta, and the one who divided whole Vedas in four text form was born in Nepal. Similarly, a district in southwest region of Nepal has been named Kapilvastu after Vedic sage Kapila, founder of Samkhya school of Vedic philosophy, who had accepted austerity in this holy land. Another pioneer figure in the field of Sanskrit grammar, Panini, had written probably the first textbook on grammar in any language, residing in central-west region of Nepal. The abovementioned sages had indirect but impactful influence in Ayurveda.

The land had its effect on Ayurveda and reciprocally Ayurveda also had its effect on this land and people of this land. Ayurveda had been in practice in Nepal since ancient times and was the mainstream medical practice till the introduction of modern medicines. The practice of Ayurveda still lives in every kitchen and daily routine of a Nepali individual. Many spices that are used in the kitchen of every household here are of great medicinal value. It’s the contribution of Ayurveda that Turmeric and Holy basil are still used as the first line of treatment for any kind of fever by most individuals in Nepal. Though minimized greatly, the practice of passing knowledge about medicinal plants from generation to generation is still in continuation. Other than these Nepal is ideal land for the practice of Ayurveda. Nepal lies within a special topography where all the six seasons mentioned in Ayurveda can be observed. Thus, practice of Ritucharya (seasonal regimen) is possible in this landscape. Ayurveda considers the area where cold, rain, heat and breeze are in equal proportion as a better place to stay healthy. This is better suited by the climatic condition of the hilly region of Nepal.

The basic philosophy of Ayurveda and an average Nepali do coincide that is – Synchronizing oneself with nature is the key to health. Inability to maintain that synchronicity leads to disease. Health concern in recent days is growing day by day in Nepalese and most individuals have directed their dietary habits towards healthy and organic foods. Also, yogic practices and meditations are being part of a daily routine. Use of ayurvedic medicines and detoxification therapies are gaining importance again amongst the people.

Anyone who aspires to gain the knowledge of Ayurveda and wants to experience its genuineness must visit Nepal. Beside these Nepal Yoga Home provides you with various concise packages of retreat programs on Ayurveda. We assure you will have a great time and experience during your stay with us.