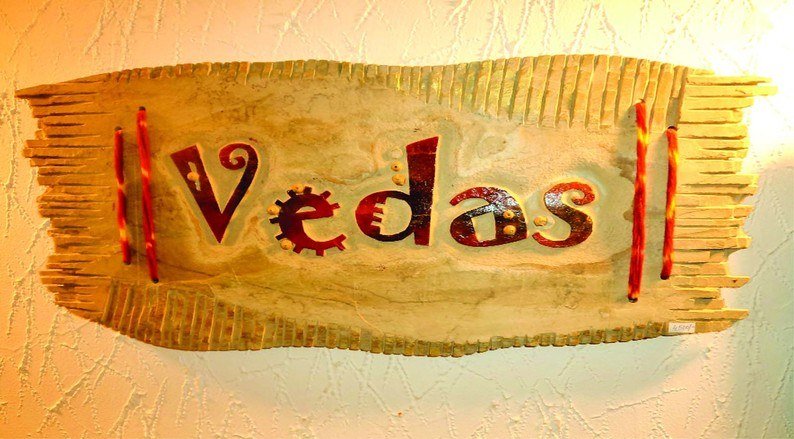 Vedas – A Treasure Of Unlimited Knowledge

The sages of the ancient time are the seer of the knowledge of Vedas. They were the enlightened persons who had not any personal desire to live their life in this world. They wanted to help humanity for their easy life in this world by the knowledge of Vedas. They gave an essential knowledge of life and more in the form of Vedas. Vedas are not the creation of the mind of the sages but sages heard the knowledge in their deep level of meditation which was already existed in the world. God gave them the power to hear the knowledge of the eternity to spread to the world about spirituality and mystery of life and creation. Vedas are written in the Sanskrit language in ancient Indian Subcontinent. Vedas have the deep supernatural sacred knowledge. In Vedas, we can find many hymns to pray many gods like Agni, Indra, and Surya etc. The first life of Rig Veda is,

Om, I appease the god of fire, who is the priest of the sacrifice. The sacrifice can lead us to the gods.

This first line of Rig Veda praises the god of fire for the reason that he can lead us to the gods. The main purpose of human life is to be enlightened and for that, we have to sacrifice ourselves to God who can guide us to get salvation.

There is the spiritual, medicinal, musical and economic knowledge in Vedas. It is believed that Vedas were written between 1500 and 1000 BC. The knowledge and the verses of the Vedas had been retained as the listening and remembering system between teacher and student. Many copies of Vedas were written by the hand in very beautiful letters. Some copies of them can be found now also and they are on the list of the heritage of the world by the UNESCO. The tradition of citing and remembering of the verses of Vedas remained for a long period of time but the modern education system overlapped the system of Gurukul, where students studied Vedas and many eastern philosophies.

It is said that Veda was only a book in the ancient time but it was divided into four parts to make easy to read it. In Vedas, the knowledge is systematized so that the knowledge can be easy to find and easy to learn. It is believed that the great sage Veda Vyasa wrote all four Vedas or he collected and transcribed in the form of letters from the listening and remembering the tradition of Vedas. There are many sages who created the verses of Vedas in their meditation.

There are four types of Vedas in different subject matters but they are interrelated to each other and they have also repeated the verses of one to another. Most of the verses of Rig Veda repeat in other there Vedas.

The Four Types Of Vedas:

Rig Veda is the oldest book of Vedas. This book has the most important matters of the different aspects of human life. It is the collection of verses or hymns or the lines of poems which praise many gods of the Vedic period. It is the collection of Mantras. It has 10 books, 1028 hymns, and 10,600 verses. Agni is the first deity for whom Rig Veda worshipped in its starting line and starting word. In Rid Veda, then there is the number of gods, the verses Rig Veda is praised. Indra and Surya also fall into that category. Nature is powerful and we have to worship the nature of being helpful in our life. Agni is the god of fire and fire is the most important factor in our life. Surya is the sun and without the sun our life in this world cannot be possible. Indra is the god of rain and rain is the most important part of our life because rain helps us to grow the food that we eat.

Rig Veda can also be found the mystical knowledge of the world and beyond. The knowledge is in the form of imagery which should be understood by deep concentration. There is information about yoga and many aspects of our body. There is also the knowledge about the seven Chakras in our body. We can find the knowledge how we can transfer our energy to the upside of our body by the spinal cord. The energy of the base Charka should reach to the last by the spinal nerves for that transformation. To attain salvation, we have to purify our body and practice yoga on a regular basis.

Sama Veda is the collection of songs which are taken from Rig Veda almost of all. Among 1549 verses 1474 verses are taken from Rig Veda in the form of song. Only 75 verses are original. Sama Veda is considered as an origin of music in Hindu tradition. All the stanzas are in the form of songs and melody. Purpose of those songs is to go into the deep level in singing and understand easily, the essential knowledge of the universe. Singing is an easy way to remember something fast and memorize for the long term. The songs are in the definite meters and orders. The songs are systemized in the different way of citing. We have to learn deeply to know how to cite the verses in a systematic way.

Yajurveda is the collection of the prose form. This is the foundation of the rituals in the Hindu religion. It focuses on the sacrifice to God to attain salvation. The meaning of the sacrifice is to be devoted to the God of one-minded. This Veda has many chanting to worship God or many gods. This is the base of the ceremonies of the Hindu tradition. The purpose of worshiping is to devote to the gods. It is possible to get enlightened in our life to surrender ourselves to God or gods. We have to forget ourselves in order to seek knowledge. We have to throw the ego and for that, we have to forget ourselves for the sake of attainment.

Vedas teach us the knowledge which is permanent, not the temporary and never become old by the time. This is the real knowledge but not the fake knowledge which is the way of living a very meaningful life. If we want to know how our life becomes really meaningful, we should study Vedas deeply. Vedas give knowledge about the world and beyond this world, extraterrestrial world.

The real knowledge is to live with the knowledge and practice the knowledge in our life. Vedas give us practical knowledge to live in this world is aware of life after death. The knowledge of Veda believes the life after death, the karmic debt, and yogic practice. There are different ways to get attainment. There are many ritualistic ways and Mantra chanting method. The beautiful part of Vedas knowledge is to be grateful for all the aspects of our life. The ultimate goal of human life is to get enlightened in life. Life is precious and we don’t have to waste it on unnecessary matters of gathering materialistic goods. The gods in heaven also become jealous of the humans because they can’t upgrade themselves by their Karma but every single human being can get salvation if they utilize their life to get enlightened in life.