The Moral and Philosophical Underpinnings of Ayurveda 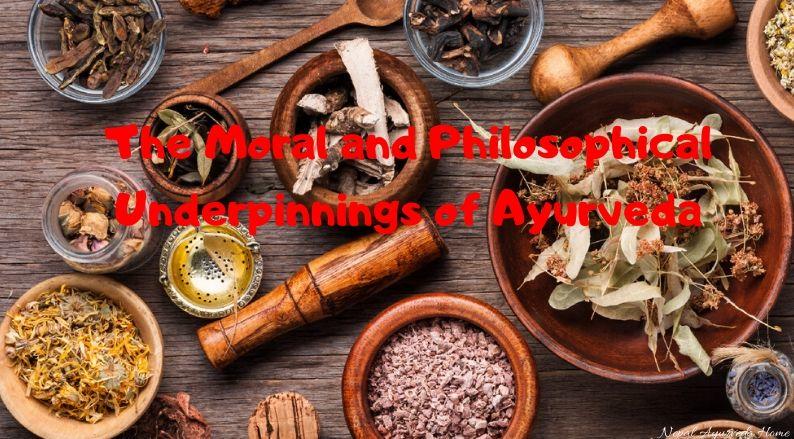 Ayurveda has become one of the buzzwords in recent days. The curiosity of Ayurveda lies partly because of its association with Yoga and partly due to the propagandized rhetoric that Ayurveda contains the anti-ageing secrets, the Herbal fountain of youth. Some of the claims might definitely be true, as in Yoga being the spiritual adjunct to the more “physical” Ayurveda and certain some Herbs and foods have been shown scientifically to be possessed of Anti-ageing, telomere lengthening properties.

However, Ayurveda is not just a treatment system or just an alternative medical system. In fact, it is a practical science that has had deeply rooted impacts in the Indian subcontinent. It is simply more than a treatment system. It covers the human life in a whole. This concept is often referred to as a holistic system. In fact, Ayurveda not only accounts for the physical body but also accounts energetic, mental, spiritual and blissfulness state of the body.

Ayurveda As a Philosophy

Ayurveda is sort of essentialist in a philosophical sense. Ayurveda provides a broad vision about life, through its four aims or essence of life. The four essences of life is – Dharma, Artha, Kaam and Moksha. Dharma is a religion or entity that binds a person and society in rules and virtues, inspiring society for moral conduct, so that human society and civilization could prosper. Artha focuses on economy and fulfilment, necessities of materialistic things to sustain life. Kaam is an aspect where it shows values of wishes and desires. Desires are to be acknowledged and fulfilled. Kaam is about psychological, mental faculty of human life. It is a momentum to keep life and society going. Moksha is the ultimate liberation or freedom from all the worldly attachments, sufferings and circle of life (Samsara).

Ayurveda also describes the tenets of three Eshana. The three Eshana are Praneshana, Dhaneshana, and Paralokeshana. Praneshana is ways to preserve life and maintain survival. Dhaneshana is a means of living to sustain life. Parlokeshana is to think and act in ways that shall benefit the afterlife. The concepts of four essences of life and three Eshana encompass many aspects of life – from daily lifestyles to proper conduct. Ayurveda is not only about healing but also about techniques, objectives of survival. It highlights different facets of life – physical, social, psychological to spiritual.

Ayurveda describes life (Ayu) as an amalgamation of body, soul, senses, and mind. Life is more than that what is physical. To make life more meaningful and to increase the quality of life, Ayurveda provides an integrative approach to life. Ayurveda also prescribes Triupastambha. The Triupastambha adds prana to life, increases the vital life force. The Triupastambha are Diet, Sleep and Brahmacharya (control of senses and desires). It covers the biological needs and virtues [morals, ethics, self-discipline], which are required to be in a balance or harmony to maintain a healthy lifestyle.

The concepts of Ritucharya (seasonal regimen), Dincharya (daily regimen) justifies Ayurveda as a lifestyle science. Ritucharya teaches how to adjust body and mind according to the season and environment. The two regimens which are practiced even today have been minutely incorporated into the lifestyle of average subcontinent dweller. Panchakarma and Yoga are live examples of the heritage of Ayurveda, which not only have helped in healing but added to the understanding of the body, self, and life. The learning stretches far beyond just biological or physical body, in fact, Ayurveda treats health and life as an interwoven object. There are social, environmental, economic, hereditary, spiritual, psychological dimensions and entirety of these things form a complex interplay before the psychical body comes into existence. All these interactions take place until the end of samsara (Moksha).

Ayurveda is a science where every individual is treated uniquely. Every individual has a different constitution which is called Prakriti. Every Prakriti is affected by the dimensions that have been mentioned above to create a whole and happening life. The sound understanding of individuality offered by Ayurveda helps provide the term holistic a new meaning. Thus, Ayurveda is definitely more than a treatment system. Ayurveda is an evergreen knowledge, “time-tested” formulas. It is an awareness and wisdom that have survived through centuries.