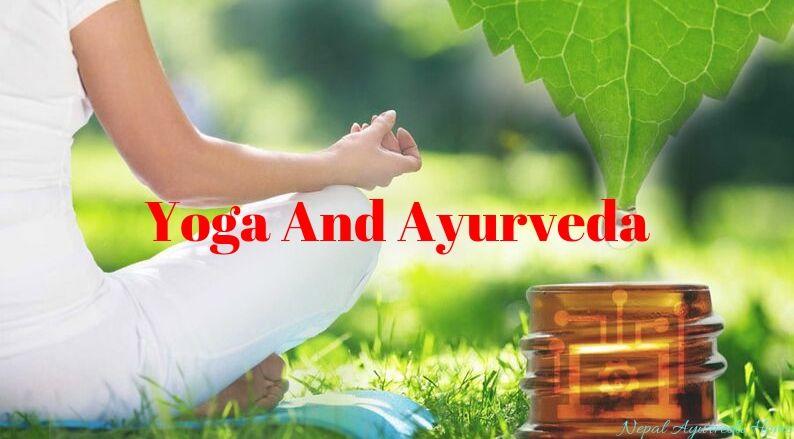 Yoga and Ayurveda both are the two shining gemstones of Vedic civilization. Both of these form the practical facet of the teachings of this civilization. The ancient Vedic civilization have always tried to inspire the mankind to seek for knowledge and ultimate truth. Since, the main motto of human life was summarized for attainment of ultimate knowledge, to fulfill this motto, prevention of human life became essential. Realizing this point, Yoga and Ayurveda were devised.

What are Yoga and Ayurveda?

Yoga is one of the six Vedic philosophy. In particular, it deals with the experiences and activities carried out by mind. The word ‘yoga’ in actual means union and this philosophy aims to attain the state of union between jeevatma (individual consciousness) and paramatma (universal consciousness). This state is attained when there is Chitta vritti nirodha i.e. when all the fluctuations in the mind are restricted.

To restrict all the fluctuation in mind, yoga philosophy proposes eight pathways called as Ashtanga-yoga. These include:

Ayurveda is a conjugated term made up of two words Ayu and Veda. The word ‘Veda’ is derived from the word root ‘Vid’ which means ‘to know’ while Ayu simply means life. This ancient form of life science aims to maintain health by preventing health of healthy ones and by curing the disease of the patients, in order to make an individual able to attain purushartha chatushtaya (four objects of human pursuit) – dharma (moral values), artha (prosperity), kama (pleasure) and moksha (liberation).

Ayurveda considers health as a state of an individual in which the functions of his bodily elements are in equilibrium and his senses, mind and soul are in delightful state. For the maintenance of health Ayurveda proposes a holistic approach of management through diet, lifestyle and medication.

Influence Of Yoga On Ayurveda

Both yoga and Ayurveda are derived from vedas. Talking about ages, yoga is older than Ayurveda. There is no exact date of when these theories originated, but on going through texts it can be easily understood that Ayurveda had been influenced by yoga philosophy.

The concept of pragya-aparadha, considered by Ayurveda as one of the three etiological factor for origin of disease, is the contribution of yoga philosophy. When a person’s ability to understand, ability to store information and power to recall memories get impaired, he performs inauspicious deeds that lead to aggravation of all doshas. This is called pragya-aparadha

The concept of trishna (craving) – source of all disease has also been derived from yoga. Classical text of Ayurveda has even stated that complete disease free state is attained when an individual is free from vedana (suffering) originating from trishna.

The three properties of mind Satwa, Raja and Tama has also been derived from yoga philosophy in Ayurveda.

While suggesting the measures for mental illnesses, Ayurveda has stated terms like dhairya (patience), smriti (memory) and Samadhi (complete integration) which are described in detail in yoga.

Similarities and Differences Between Yoga And Ayurveda

Both yoga an Ayurveda provide teachings of life-science. The aim of both Yoga and Ayurveda is to make an individual able to attain the knowledge of ultimate truth. But, Yoga emphasizes more on salvation while Ayurveda mainly focuses on the sustenance of health.

It can be understood from the point that text books of yoga do not contain the discussion of disease pathology, diagnosis and treatment like that of ayurvedic texts. The basic concern of yoga is sadhana (spiritual practice) rather than chikitsa (therapy or treatment) as emphasized by Ayurveda.

The cleansing processes in yoga is termed as Shat-karma which include the following six therapies:

Similarly, detoxification processes in Ayurveda is termed as Pancha-karma, which include the following five therapies:

The yama and niyama of ashtanga-yoga and sadvritta (code of conduct) of Ayurveda shows a great deal of similarity.

Yogic system of medication can be found in Ayurveda, since both the theories base themselves in integrating body, mind and soul. Ayurveda provides the appropriate dietary, life-style and medicinal prescription to unfold the full healing potential of all aspects of Yoga. Yoga provides the spiritual and psychological basis for Ayurveda. The treatment values of pranayama and asanas have been discovered by recent studies. Integrating both of these concepts and applying in a judicious way would surely build a new dimension in health management.

We here in Nepal Yoga Home provide you with Ayurveda Yoga Detox Course where you can know about the practical application of integrative approach of yoga and Ayurveda.